The Foods of Puerto Rico

The rich Puerto Rican Cuisine, know today as ‘Cocina Criolla’ is a fusion of mainly Taíno Indian, African, Spanish, Latin American and American cultures.  In the 21st century Puerto Rico also finds itself with influences from Japan, Italy and Thailand, among others. To appreciate Puerto Rico’s gastronomy today, some of the tastiest and most complex in the Caribbean, it’s important to understand where this blend of flavors originated.

The Taíno Indians were the local indigenous people who called the island of Borikén their home.  The natives’ diet was mainly vegetarian and their main source of nutrition came from yuca (casaba).  Yuca is eaten throughout the Island today in various forms.  The Spanish colonizers conquered the Island in the late 15th century and introduced foods such as olives and olive oil, sugar cane, cilantro, onions, garlic, garbanzos, breadfruit and orange, all key elements in local cooking today.  Spanish dishes such as calamari rice, paella and croquetas are common dishes served in Puerto Rican homes.

The African slave trade brought important foods and techniques to the Island’s cuisine.  The most significant of the former were plantains, bananas, yams and gandules (green pigeon peas).  The African population also developed many coconut dishes, which are still quite popular. Their favorite cooking technique was frying, which quickly became Puerto Rico’s most popular way of preparing food.  So all those savory Puerto Rican fritters that we love, were influenced by African cooking traditions.  Foods from South and Central America such as pineapple, tomato and sweet potato made their way to Puerto Rico by way of trade and migration.  Lastly, the last major influence in Puerto Rican cuisine is American.  When the US took over during the Spanish American War in 1898, American foods and customs were combined with Puerto Rican traditions.  It was the beginning of a new era of Puerto Rican gastronomy where lard was replaced by corn oil and bacon was introduced. 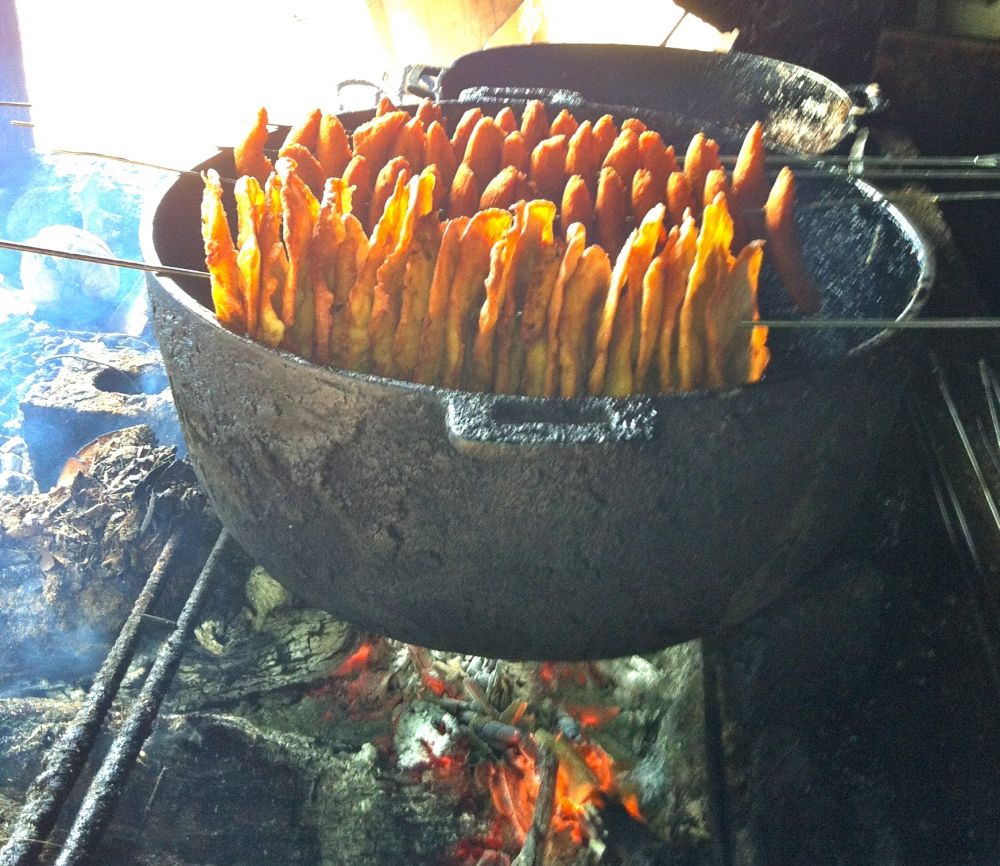 So here you are on your way to Puerto Rico or perhaps you are already here. Let me share with you some of the most popular dishes you will encounter during your stay and a few of my favorites.

Let’s begin with mofongo.  Mofongo is a plantain dish influenced by African frying traditions. The green plantains are peeled, chopped and deep-fried.  An aromatic and flavorful garlic, herb, butter mash is prepared on the side and then combined with the fried plantain.  The result, mofongo, can be seen on almost every local menu as a side dish.  But the best way to each mofongo is stuffed.  Whether its conch fish, shrimp, lobster, beef or chicken, a stuffed mofongo is the way to go!  Tip: If available, order a mofongo de yuca, it’s a lot creamier and smoother than the plantain and if it has lots of garlic.  It’s divine!

If there is a dish that identifies Puerto Ricans, it is rice and beans.  The most common beans are red and white.  They are available in almost every local restaurant and are served with a side of white rice.  Garbanzo beans with chorizo are my favorite but those are harder to come by.  Along with black beans, which are Cuban, they are typically cooked at home.

Arroz mamposteao is another version of rice and beans but instead of having the rice and beans separate, in this dish, they are cooked together.  Ham or bacon is added for additional flavor and achiote for color. 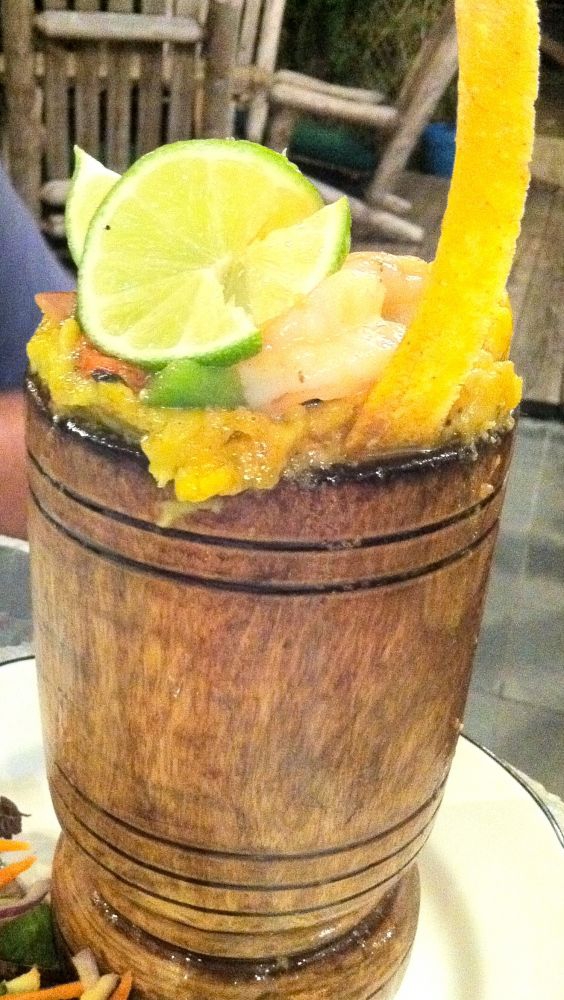 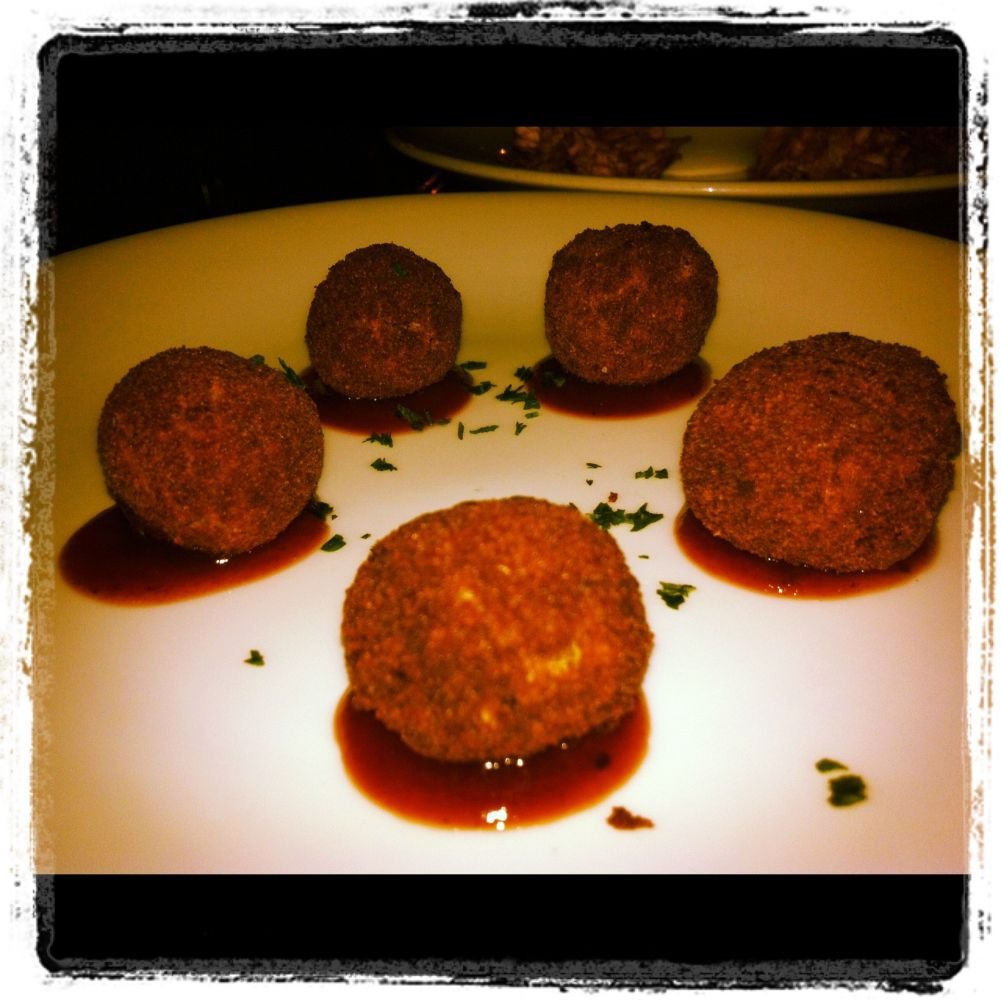 The holidays are right around the corner and here in Puerto Rico the locals are already preparing for the festivities. Not only is Christmas in Puerto Rico a never-ending party, it is a party with great food!  Some traditional Christmas dishes are arroz con gandules, lechón and pasteles.  Rice with pigeon peas (no, they don’t have anything to do with pigeons) is a signature rice dish that incorporates achiote infused rice, pigeon peas and pork cooked in sofrito.

Sofrito, you ask?  Sofrito is the base of all Puerto Rican cooking; it’s what gives the food its flavor.  In the simplest form, sofrito is a combination of chopped ingredients including garlic, onions, peppers (including ajíes dulces – local perennial peppers), cilantro, recao and a bit of tomato paste.  These ingredients are all sautéed in olive oil to create a flavorful and aromatic sofrito.  And it’s easy to make at home.  If you have any questions, just email me.

The holidays without lechón are non-existent! Lechón is a pork dish that is made by seasoning and then roasting a whole pig, rotisserie style.  The cooking and basting technique that lasts for several hours’ results in crisp skin (a delicacy here on the Island) and juicy, succulent meat. Yum!  But can you find lechón year round? The answer is yes!  Take theRuta del Lechón (a.k.a. the Pork Highway) along the Sierra de Cayey mountain range into Guavate to eat your whole pig slowly spit-roasted over charcoal.

No Christmas table is complete without pasteles, savory meat pastries.  The dough is made from grated green bananas, green plantains, pumpkin and yautía (taro).  The dough is placed on a heated banana leaf and then filled with stewed meat.  Parchment paper is then folded and tied with kitchen stringto create a little Christmas present.  Pasteles are very time consuming to make and therefore difficult to find year-round in restaurants.  Families usually create an assembly line in their homes to make pasteles.  Pastel making becomes a whole-day event. 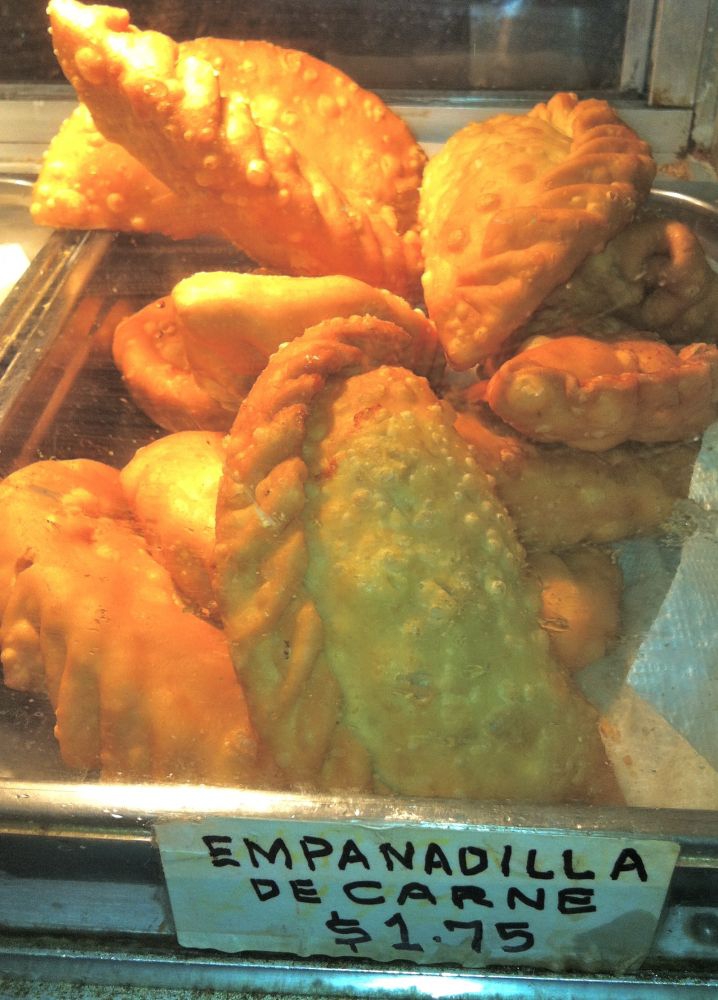 Surrounded by water on all sides, Puerto Rico has always been known for fantastic seafood.  While on the Island, I recommend chillo frito (whole fried red snapper), ensalada de pulpo o carrucho (octopus or conch salad) and fresh lobster.

Ensalada de pulpo/caruccho.   Fresh octopus or conch salad is absolutely divine.  In its simplest and most delicious form it contains chopped peppers, onions, cilantro, lime, olive oil and vinegar. It is seasoned with salt and pepper.  Voilà!

Puerto Rico’s seafood delicacy by excellence is the Caribbean spiny lobster (Panulirus argus), which lacks the large claws of its relatives and instead has spines covering its entire body.  All you need to make this dish perfect is some garlic butter and you are set.

You will notice if you haven’t already, that lots of dishes in Puerto Rico are made from plantains.  Tostones are the most famous plantain fritters.   This common side dish is made from the green plantain that is cut into pieces and deep-fried in vegetable oil.  After the plantains are golden, they are taken out, smashed in what looks like a cookie and then refried until golden.  The result is a crisp outer layer and soft interior.  They are typically eaten with mayo ketchup (a mayo, garlic and ketchup dipping sauce).

Most plantain dishes are made from the green plantain but locals love to eat ripe plantains in the form of amarillos.  The key is to choose a very ripe plantain, yellow with black spots.  Peel the plantains, chop them up into 2 inch pieces and deep-fry them in vegetable oil until brown.  For a healthier version, sauté the plantains in a bit of olive oil but the fried way is the preferred way!

Alcapurriasare cylinder fritters made from yautía root and green bananas, enveloping seafood or meat.  Crisp on the outside, then salty-chewy until you hit the meat or seafood filled center, you’ll see locals munching on lots of these.

Bacalaítos are popular fritters made from salted cod, incorporated in a seasoned flour batter. Like the other fritters, they are typical street food found at roadside stands, street events, beachside kiosks and mom and pop cafeterías.

Empanadillasare my favorite fritters.  They are shaped in a half moon and the edges are decorated.  They can be stuffed with anything from crab, shark, conch fish, chapín (a local fish) chicken and beef.  Modern empanadillas are filled with spinach, cheese and cheese and onion.  And of course, they too are fried.

Give me some sugar!

Dessertsare also a big part of Puerto Rican cuisine and there are plenty of sweet options.  My favorite and a staple in almost any restaurant on the Island is flan, a custard dessert with soft caramel on top.  Puerto Rico has recipes for flan that include vanilla, coconut, cheese and many more.  Some of the other well-known desserts are tembleque (coconut pudding), tres leches (three milk sponge cake), dulce de leche (meaning candy of milk) and brazo Gitano (rolled sponge cake with fruit and/or cream filling). Reposterías or bakeries, which are found all around the Island, prepare tasty treats like quesitos (cream cheese filled pastries), pastelillos de guyaba (guava pastries), besitos de coco (coconut kisses), among many others delicacies.

Paulina Salach is a writer, food critic, cultural guide, event producer and entrepreneur. She is the co-founder and organizer of Puerto Rico Restaurant Week™ and owner of Spoon Food Tours . Contact info: paulina.salach@gmail.com 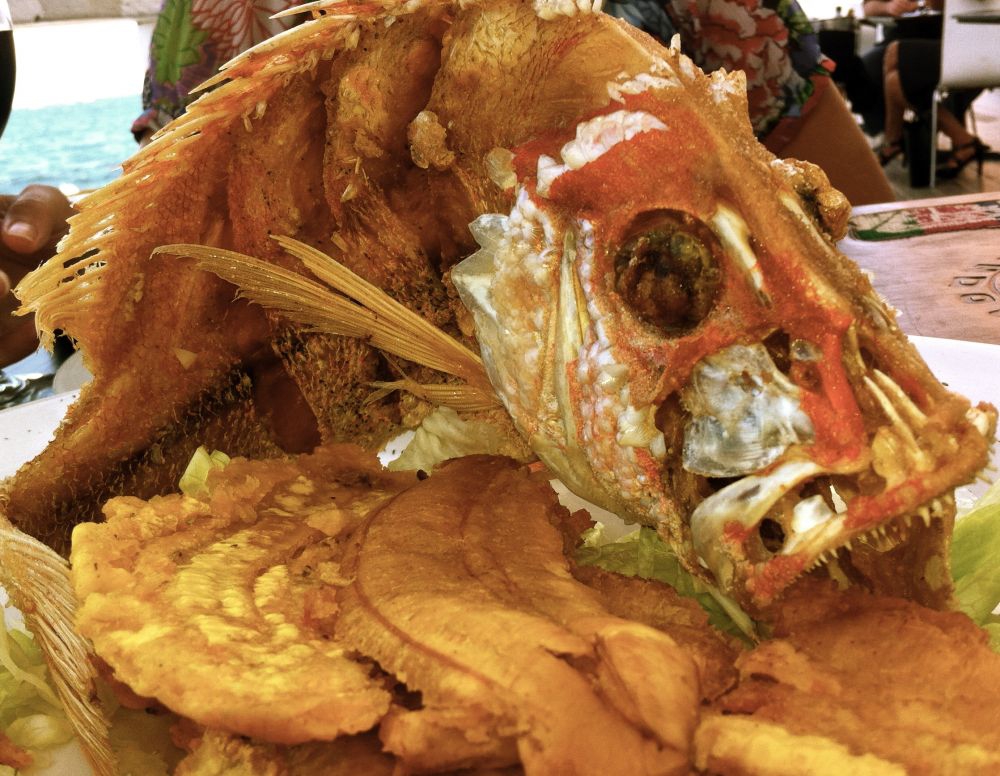