Filter by Date Filter by Type

Details on the agenda and hours of scheduled events to be updated as received please check at the end of this article!

After a rough few months due to Hurricane, María Puerto Rico is ready for SanSe 2018!, Christmas is not over: at least not in La Isla Del Encanto. After Christmas Day, Puerto Rico and most of Latin America celebrate Epiphany, or Día De Los Reyes Magos, on January 6th. After more gift-giving, Puerto Ricans celebrate what they call Octavitas the week after - or some of the last festivities of their long Christmas, which start right after Thanksgiving in November. The truth of the matter, though? The official end of the holidays on the Boricua calendar is the San Sebastian Festival. 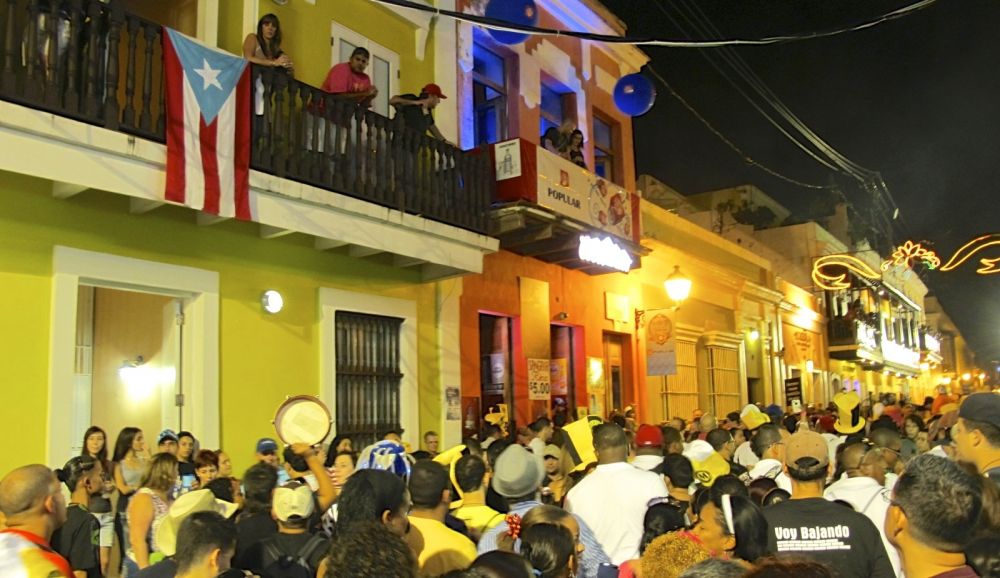 Typically celebrated on the third week of January (Thursday - Sunday), the annual 4-day festival takes place in and around Calle San Sebastián in Old San Juan. This year the event has been extended to 5-days beginning on Wednesday, January 17, 2018. Many of the historical cobblestone streets are closed to motorized vehicles; artisans and food vendors set up shop; local musicians and the general public alike bring their instruments and sing bomba and plena numbers. In a nutshell: all aspects of Puerto Rican culture convene in what most regard as the best festival of the island. This is the perfect crash course for tourists eager to learn more about the Indian Taíno, African, and Spanish heritage.
History of the San Sebastian Festival

San Sebastián, or Saint Sebastian, was an early saint and Christian martyr - one of the many victims of the persecution under the Roman emperor Diocletian in the Third Century AD. As a Spanish (Catholic) colony, the day of Saint Sebastian was commemorated with a feast on January 20th.

The first-ever San Sebastian Festival only lasted one day (the feast day) and was organized by one of the priests of the San José Church, which is located right on Calle San Sebastián in Old San Juan, in the 1950’s. However, the festival wouldn’t be popular until after a hiatus of about 20 years.

In the 1970’s, the San Sebastian Festival was kick-started once more and extended to a 4-day affair full of art, live mulato music, dancing, and mestizo food. People line up on balconies, bring their instruments, buy local crafts, and party until the wee hours of the morning. Think of it as the Puerto Rican Mardi Gras, but with a mix of African, Taíno Indian, and Spaniard traditions instead.

The 2018 San Sebastián Street Festival will be dedicated to Lin-Manuel Miranda and shared with the residents of Old San Juan who after the passing of Hurricane María opened up food kitchens to help those in need.

This year there will be 12 cruise ships visiting Old San Juan throughout the duration of the festival. 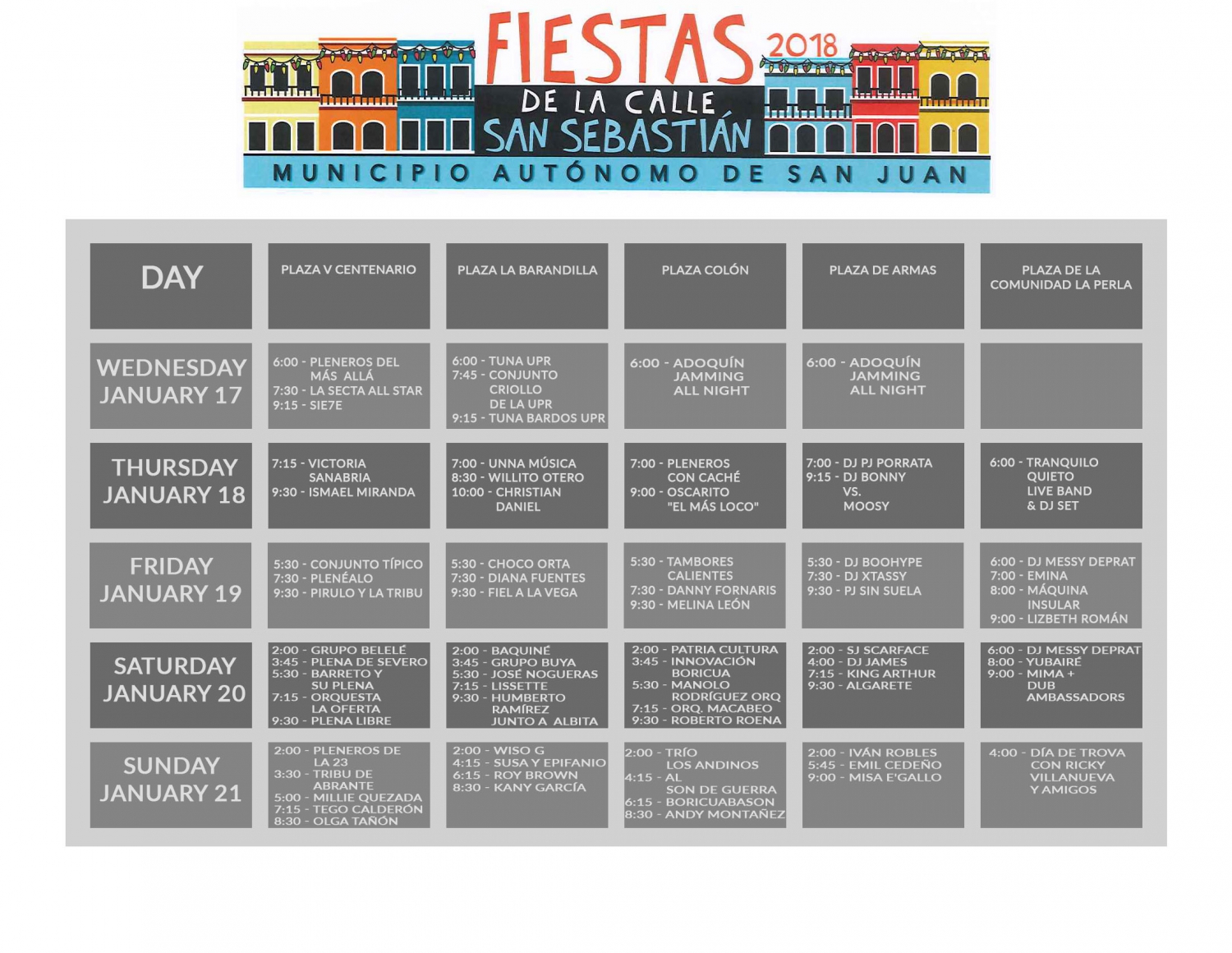 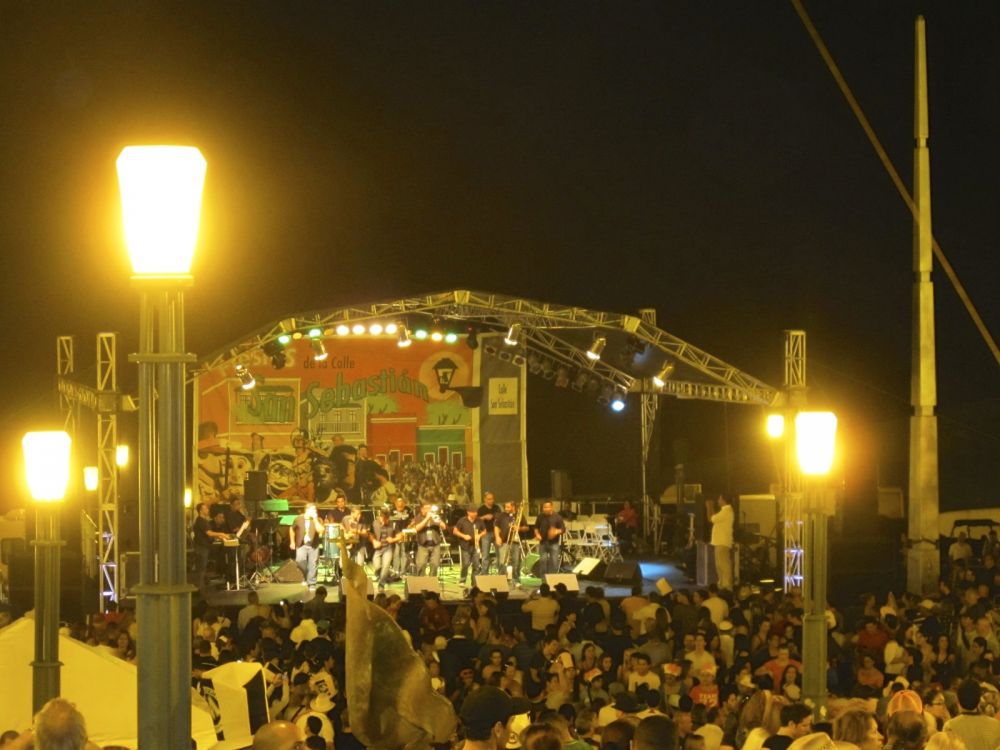 Nowadays, the typical SanSe (nickname of the festivities) setup is as follows:

- Each day of the San Sebastian Festival is divided in 2 parts: Day and night festivities. Most colorful parades, cabezudos, and costumes march down the cobblestone streets in the afternoon (approx. 5 pm), making it the ideal time to bring the entire family. After sunset, college students start to pour in with their wonderful instruments, lighting up their streets with plena and bomba music and everyone walking by joins the party!

- After around 8 PM, the live (free!) concerts tend to begin. The common venue is Plaza Quinto Centenario, but may vary from year to year. 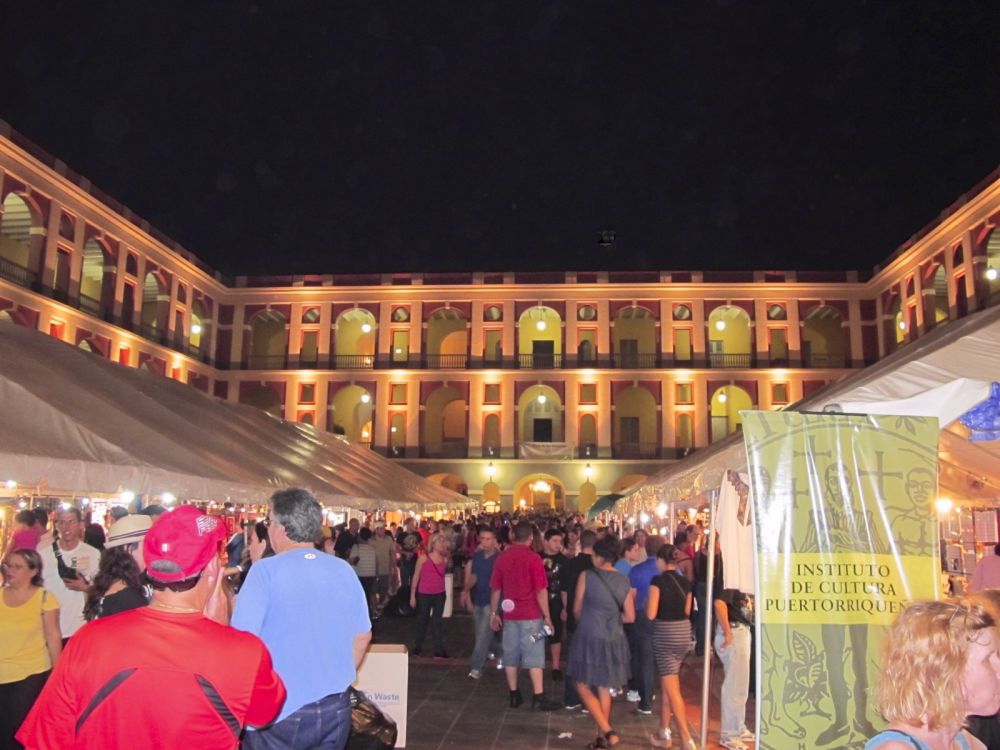 - Shopping may be done either during the day or night. However, vendors may rotate, so if you find something you like, buy it then.

- Along Calle San Sebastián and (mainly) El Cuartel de Ballajá, local artists and artisans sell their crafts and paintings, including jewelry, pottery, and handmade wooden sculptures. However, it is recommended you walk all over Old San Juan, as they may set shop anywhere they find a space!

- Drinking on the streets is usually permitted but along certain perimeters. The police erect barricades and clearly mark the areas, so you shouldn’t worry. Needless to say, the specials are incredible and the atmosphere is extremely local. 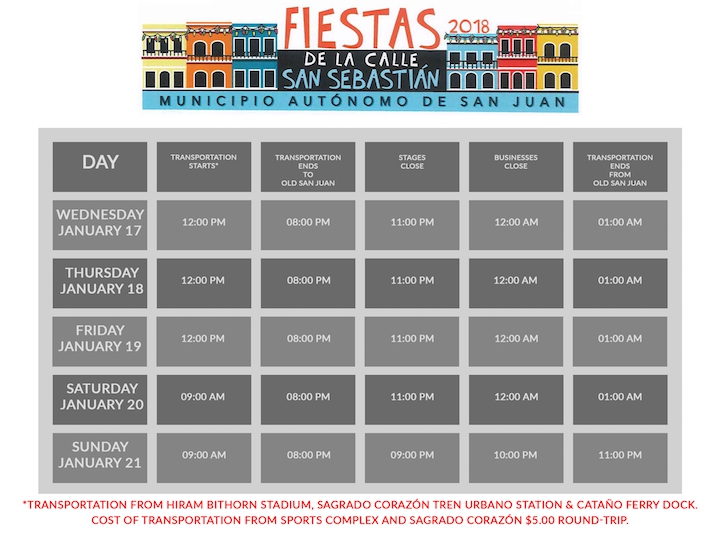 The Department of Transportation (DTOP) is expecting more than half a million people to attend the festivities in Old San Juan over the five days. It is very highly recommended that you use public transportation versus trying to drive into Old San Juan, leave your car at home!!!

The Tren Urbano will operate according to their regular hours but only at selected stations since not all are operating after the hurricane.

There will be taxi service at the Convention Center for $5 pp. The parking there is $8 per car.

NOTE- ALL PUBLIC TRANSPORTATION VEHICLES (taxis, buses, guaguas) WILL DROP YOU OFF ON THE NORTH SIDE OF THE CAPITOL BUILDING> YOU HAVE TO WALK FROM THERE. On the way home- ALL TRANSPORT LEAVES FROM CONSTITUTION AVENUE, ON THE SOUTH SIDE OF THE CAPITOL BUILDING.
The ferry (Acuaexpreso) will operate from Cataño to Old San Juan (fee 50¢) from 6 am on Thursday and Friday and starting at 8 am on Saturday and Sunday. The ferries will operate from Old San Juan to Cataño until 1 am on Thursday until 2 am on Friday and Saturday, and until 12 midnight on Sunday.

Customers of Banco Popular that present a valid Banco Popular credit or debit card will receive complimentary transportation from the Puerto Rico Coliseum to Bahía Urbana in Old San Juan. There is a maximum of 4 people per card. Parking will be available for $10.00 at Popular Center in Hato Rey.

Maria Alexandra Laborde has lived, studied and travelled extensively throughout Puerto Rico, the Middle East & North Africa. She shares her knowledge and love for the Arab world through stories, travel guides, and photo essays on her niche blog Travel The Middle East. Also, Maria is the author of LatinAbroad: Cultural Travel Blog, where she shares cultural encounters and advice after travelling to more than 20 countries across 4 continents. Follow her on Google+, Facebook and Pinterest!